At least once a season we get asked something along the lines of “I got all these awards, why didn’t I make Masters?” This is always a loaded question. Some people don’t like critical feedback. Others want it and don’t listen, continuing to make the same mistakes. A lot of times it comes down to Viewers Choice vs. Technical Merit. Sometimes someone might only get one nomination. This is the one award that the staff will put their final approval on and sometimes. Because of this, the final decision sometimes comes down to an argument on behalf of the staff nitpicking things to death, especially the Masters on staff. You would not believe the things we have nitpicked.

To Err is Human…

Let’s be honest, we’ve all made mistakes that we have noticed after rendering and we just leave it because we don’t want to go back and fix things. Maybe we just spent forever rendering things and then another forever uploading to YouTube. Maybe we don’t have the set any more. There are at least a dozen and a half reasons not to go back and fix it. Personally, I can not count the number of times I have discovered a cursor in my shot where FRAPS recorded it and I have had to go back and redo it. It was an ongoing thing with Zombie Creek. There might still be a brief scene in there with a visible cursor.

I actually started rendering each scene as I was done filming where I could look at the final shot to see if anything needed fixed. Doing this also allows you to upload short clips, set to private (of course), where you can have someone else look at it with a fresh set of eyes. More than once this has prevented me from doing a half arsed job on something. More than once both Gus and Peacemaker have said to me, “What is this crap? You can do better! Fix it!” Okay, they are usually nicer about it, but you get the idea. The best part is, they won’t tell me what I screwed up so I have to assume it’s everything and go back to the drawing board. Most of the time it’s because I’ve done a crap job at shooting my footage.

Working with The Sims

“Mod it ’till it breaks” is the battle cry of machinimators. We have mods for everything. The funny thing is, when I started making machinima with The Sims 2 I was unaware of a lot of the mods for the game at the time and worked with what was built into it. Now, I have so many little mods in the game that I want to cry every time there is a game update for The Sims 4. Food and plant sparkles, music notes, fame shine, and so much more must be removed. Vampires must be kept in their own world. I don’t want one walking by in the day and reenacting Armand’s death scene from The Vampire Armand. Custom Content must not be allowed on random sims to prevent horrible fashion things from happening. There will be no random push ups.

However, no matter how much you mod the game, there are still problems that need to be addressed and covered up. One of them is clipping. 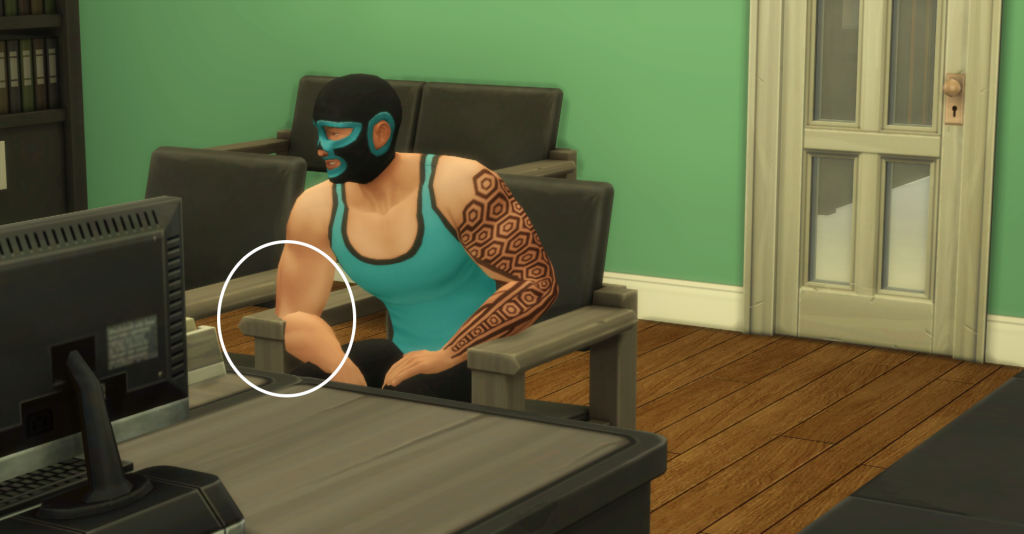 I actually took this photo for a comic that I was doing and noticed it was unusable due to the arm clipping into the chair. Over the years I have noticed that a lot of people, storytellers, picture takers and machinimators alike, just write this off as something that happens and we can’t do a thing about it. As we are watching a machinima, if it happens once, quickly, we forget about it. If it keeps happening, it become distracting.

We can’t stop clipping, but we can hide it. That is what makes a good machinamator a great machinimator.

A small turn of the camera and it’s fixed! Well, at least it is obscured and no one is the wiser. 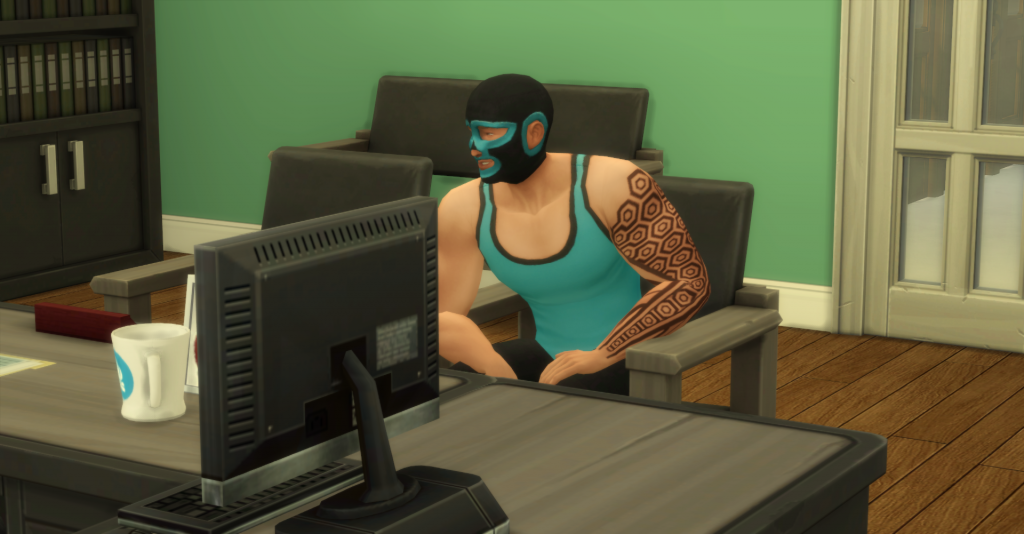 When you set up your shots, instead of living with clipping as something you can’t do anything about, see if you can hide it using a different camera angle.

Dealing with hair and clothes is a different story. It normally calls for a costume change. I’ve gotten to the point that if a hair clips where it shouldn’t, I delete the hair. There is probably one out there similar made by someone else who has sorted out any clipping issues. The same with clothes. Something I learned the hard way with The Sims 3 is that there are some people who create custom content for the sole purpose of picture taking. This content is not good for actually playing the game. The second there is movement, the case of form over function becomes quite obvious. If something was designed for picture taking, and not game playing, it’s not going to work for machinima.

If something is not functional, DO NOT use it.

What’s With the Hamster?