When we think of mods for making machinima we think right off of the big 2: UI Cheats Extended and Master controller. Most people use one or both. However, there are some smaller mods for The Sims 4 that you may not know about, especially if you are new to The Sims or machinima. These mods will clean up your machinima or save you a little bit of aggravation and time. 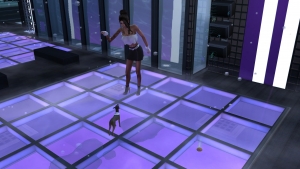 No Pets at Clubs – Have you ever sent your sim to a club only to find it’s Dogs Night Out? There is dog poop on dance floor and they are eating the furniture. Good chance that the bartender is also serving Milkbone rather than nachos. Okay, that last one isn’t true, but allowing pets in clubs was kind of an oversight on EA’s part. While it’s a funny WTF moment the first time you see it, it makes filming machinima difficult. You get your sims set up for a huge dance scene and suddenly a cat enters the scene and ruins everything. It’s bad enough that sometimes we want a box of death for every townie that walks into a scene and ruins it but the second it comes to virtual animal cruelty we just come up with every option we possibly can to get the animal to move along. The No Pets at Clubs mod will save a lot time and frustration. 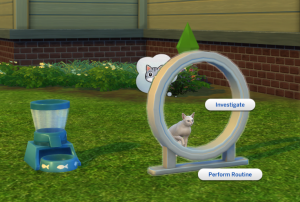 It mimics the pliability of pets in The Sims 3 and gives you full control over the pets in your game. Need a cat to leave the room? Now you can walk the to the bed and make them take a comfy nap out of the way. Need to film a dog doing something specific? Instead of having a sim interact with them until you get the footage you need, now you can just tell the dog to do what you need, as long as the dog knows how to do it. It does have some limitations.

No Celebrity Walk Style – One of the things that have always annoyed me about The Sims 4 is the walk styles. I have always wanted to use them to make a Sims 4 version of Monty Python’s Silly Walks sketch. Don’t get me wrong, the walk styles can be great at the right place at the right time but when a sim is walking like they have a stick shoved up their butt 24/7 it just needs to end. These walks show up more often than not when you don’t want them.

The celebrity walk style introduced with Get Famous is probably the most annoying of the lot. “I need to go to the bathroom, I’ll just walk from my living room to my bathroom like I’m more important than everyone else…even though everyone else can’t see me do it.” Seriously, just stop…or I will make you. Trust me, I can make you.

No ZZZ’s and No Music Notes – Unless you are making an “animated” project or maybe a music video, these really have no place. Yea, I realize some people just like them, but when was the last time you seen a movie or TV show that had music notes come out of an instrument or sleeping z’s come out of someones head? They are really distracting in a serious project. I’ve noticed that some people just try to set up their scene where these things aren’t seen. Well, you don’t have to do that anymore. The best part about these mods is they have never needed updated. While you are at it, you might as well get rid of those Plant and Food sparkles because they are equally distracting and make no sense in 99% of machinima projects. As a side note, make sure you turn off the fame shine on your celebrities. 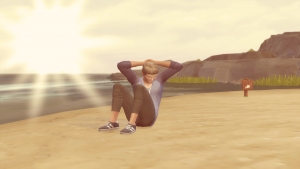 No Autonomous Workouts – Nothing, and I mean nothing, makes me want stick a sim in a Room of Doom faster than autonomous sit ups and push ups. If I could reach through the computer screen and stab sims for this, I would. I have had to re-film so many scenes because some health nut comes along and is all “Hey, watch me do some push ups!” I don’t care. The sims who are trying to make this machinima with me don’t care. The viewing audience doesn’t care. You are distracting and you are wasting my lighting. Take yourself and your wheat germ smoothie to the gym and leave us alone. You have a number of them to pick from. 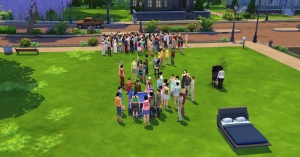 Full House Mod – Need all of those children from your 100 Baby Challenge on the lot at once? No problem! Well, there is no problem as long as your computer can handle it. It allows you to have 24 sims in your family at once to keep performance problems down. If you need more than 8 sims you can now have them. You will need to make sure that your dressed how you need them to be before adding them to your family because you won’t be able to edit them in CAS once they are there.

Neighborhood Protection – Sim vampires aren’t always the sharpest tools in the shed. More than one has shown up to watch someone busk with a guitar in the middle of the day only to trigger a visit by the Grim Reaper. Not cool. Unless your name is Armand you are not allowed to walk out into sunlight and die. Keep those vampires at bay with this mod! The original mod creator has gone MIA but LittleMsSam has updated it and the link is buried in the comments for the mod. You will have to scroll down a few posts to find it. 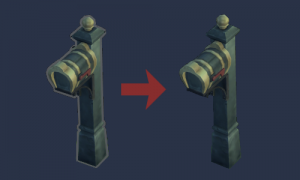 Hidden Highlights – We’ve all done it. We’ve left our mouse on an object or sim not realizing it and filmed. Watching the playback we see that white highlight around the object or sim and realize we have to film an entire scene over again. With the Hidden Highlight mod you don’t have to worry about doing that again. There are two variations, one that hides it all together, and one that will flash when you click on an object if there are interactions.

How to Machinima: Sets

The Past, Present, and Future of Machinima

2 thoughts on “Mod It ’till It Breaks: Mods for TS4 Every Machinimator Should Use”