Let’s be honest, once we finish a machinima project and upload it to YouTube we want it to go out into the virtual world and promote itself. We spent hours, weeks, sometimes months on it and we want it to earn it’s keep. It doesn’t work that way and I wish it did.

Making machinima is easy. Making promo material for it, not so much. I struggle so much with it. Oh how I struggle. The promo material for It’s Mostly Sandy in Oasis Springs has been a true test of creating something out of nothing. When I went to work on the poster I had no ideas for it. I didn’t know what I wanted to say with it. I don’t know if I ended up saying anything with it….and I’m supposed to be a Machinima Master.

Story time. I was nominated for Masters the season I released Zombie Creek. When I seen that I was nominated, I thought that someone had lost their mind. Then again, Gus Rockman thought I had made Masters back when I did Manscaping with Duct Tape. I actually discovered a few people thought I had made Masters with it and I have no idea why. I threw it together in like 15 or 20 minutes to amuse myself but I digress.

When I looked to see who nominated me for Masters I was quite surprised. I’m not going to name names but it’s someone who I think is an awesome machinimator and even better storyteller. For this person to say “Hey, you deserve this” was a huge thing for me. At the same time I kept thinking that Zombie Creek didn’t measure up to a lot of Masters projects. We are our own worst critics.

Zombie Creek came out of nothing. I was stuck on “What do I have to do to make Masters?” not realizing that people already thought I was there, and ventured into a voice over machinima film. But what? The idea of ending a zombie apocalypse with cow plants could only be done as a B movie. So here is this project that was supposed to come off as a low budget campy horror thing that has intentional mistakes in it. When I released it I thought “People are going to think I have no idea what I am doing because of all these editing errors. No one is going to get that I did it on purpose.”

I wish I could make the sort of projects that other people do like Sims Berrry and Tali Morgan (OMG!That Girl is Psycho) and Vanity Movies and Majestic Films. Next to the projects that these people make, my stuff sticks out like a turd in a punch bowl. Super Llama Man is one part 1960’s Batman, one part Freakazoid, one part The Tick (the animated series), and one part The Sims.  I don’t understand why I am considered a Master. Gus and Peacemaker have argued with me about this multiple times and I still don’t get it.

It’s Mostly Sandy in Oasis Springs came out of that wanting to do a “normal” project. I mentioned before it was inspired by The Saga of Sunset Valley. I’m way out of my comfort zone here and it really makes promo material harder than it normally is.

For Zombie Creek I looked at a lot of classic B movie posters and copied the layout of one that I liked. For Super Llama Man, I did the Batman thing and just threw the logo on black. This project I didn’t even have a starting point. I started looking at movie posters until I found something that I thought I could make fit. I came across the poster for Agatha Christie’s Crooked House decided I could work with that idea. 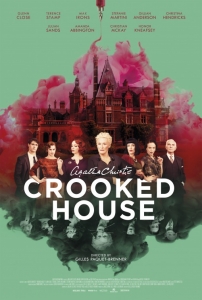 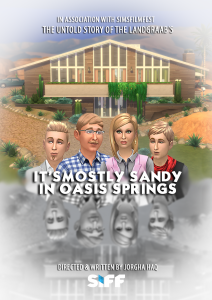 My poster doesn’t look nearly as menacing. It’s hard to be menacing with The Sims 4. The two projects aren’t even the same genre. I just liked the concept and thus a poster was created. It even looks like I know how to do more in Photoshop than I do.

Then there was the trailer. I suck at trailers. I really do. I don’t know what to put in them. They never turn out how I envision them. I feel like no one watches them even though YouTube tells me that my trailers all have over 900 views. What are the chances that one very bored person watched them that many times?

In the world of cinema, the two pieces of promo material every film, and a lot of TV shows have, are a poster and a trailer. To me they are things that must be done if I am going to promote a project. A poster and a trailer are more effective than telling people on social media over and over “Hey, I’m working on this thing. I would like it if you watched it when it’s done.” Yea, no one cares. Images and video get attention.

In order to come up with ideas for the trailer, I actually had to sit down and write down my series outline and what was going in each episode. I’ve got through episode 7 done and I’m a little stuck. I feel like episode 8 is going to end up being the machinima equivalent of the book Queen of the Damned. Not the best, but a necessary evil bridge to get from Point A to Point B without making some kind of outrageous jump in the timeline. I’m hoping I can work it out where it’s not that bad but I’m not holding my breath. Sometimes these things happen.

Anyway, I took ideas from my notes and started filming those ideas. I had no idea how I was going to put them together and tossed around some ideas in my head and turned it all into an idea omelette. I proceeded to get into a fight with FRAPS. Gus yelled at me for not using Shadowplay. Half my footage was done in FRAPS and half in Shadowplay. Next I would fight with Adobe Premiere. It didn’t want to render my video into something that would playback. At this point I was considering throwing the computer out the window as I longed for the ability to stab a computer program. Gus took a look at my settings and pointed out what was wrong. I was trying to save it for blu-ray.

Talk about your cringe worthy direct to DVD release. Suddenly The Marine 5 seems like a good idea.

Once that was fixed, I was able to render my video after hours of struggling….and it looked like complete and utter crap. Frame sizes between the two were different, some was filmed at 60 FPS and some at 29.76FPS or whatever weird setting is default for FRAPS, transitions didn’t work well and it was all a mess. I had to go back and film half of it all over again, edit it, and render. 3 days to make a 90 second trailer.

Once again, from nothing I created something and I’m still annoyed I couldn’t edit out a hiccup. At any rate, it’s a trailer and it serves it’s purpose.

Now, in the world of promo stuff, what I am good at doing is creating other things to go with the main thing. In this case it’s a story on Tumblr that is a follow in to the machinima. It’s told from the point of view of Johnny Zest. In fact, he’s being interviewed on a late night talk show about his biography being turned into a TV series. It’s definitely more comedic than the machinima is going to be, and it’s well within my comfort zone. Hopefully it generates some hype for the machinima. The trailer probably won’t. XD

And the Winners Are…SimsFilmFest Voting

Battle of the Bands Returns!