There was a discussion recently in the SimsFilmFest discord about certain kinds of machinima with certain kinds of characters. I don’t want to pick on anyone or discourage anyone but, there is a tendency for people, especially younger simmers who are just getting a feel for writing and machinima, to make certain kinds of stories. It sometimes seems that teen pregnancy and abuse stories out number everything else. When Twilight and The Vampire Diaries were en vogue, there were more vampire stories than anything else. It happens. The problem is that it creates stereotypes that turn people off of Sims machinima.

Before I go any further, it’s important that I say this. Tell the stories you want to tell. Don’t let anyone tell you not to write or film a certain kind of story. My goal here is to help you tell those stories better. The only way to get better at writing and making machinima is to write and make machinima. The more you do something the better you get at it.

In the discord discussion someone brought up that the biggest problem with the abuse and teen pregnancy machinimas is that “abuse victim” is the only personality trait of the main character. The abuse, or rape, or pregnancy is the only thing that defines the character. “Victim” is who and what the character is, and nothing more. Abuse as a plot point isn’t being used constructively as a way to develop any of the characters or for plot progression. Let’s see if we can fix that.

The start of the bulk of all my current characters was this comic:

The guy with the Pompadour, that’s Jake McSniffawitz. He looks like Elvis and is self-aware. What I had in mind when I started this was this: A comic about a self-aware sim, meaning he knows he’s a sim being controlled by someone known as The God, and he is not in any way in control of his life. Everyone else around him thinks he’s crazy. He was also a huge Elvis fan.

Eventually the comic evolved into being about Newt Davies. In fact, this is where he showed up:

He was never supposed to be a major character. Just someone that showed up sometimes for comedy relief as Jordan’s boyfriend. He was your typical punk rock dude. Everything to him was either punk rock or not punk rock.

As I spent more time with Newt he developed a personality, an entire family, and a huge backstory. A thing that I always do before writing anything is I spend time with my characters and get to know them. I don’t micromanage my game and my sims have a lot of freedom. Just playing with them helps me get to know them. You learn little things about them, like what radio station they prefer and what kinds of things they like to do when left to their own devices. Newt plays his guitar. His sister Chaos, talks to her plants or reads. Johnny Zest dances. I have other sims that play computer games or troll the forums (Super Llama Man). 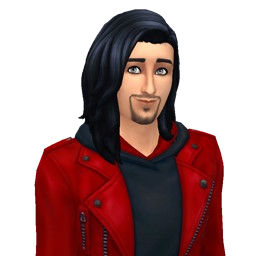 Newt is partly what the game things he should be and partly what I project upon him. His main roll has always been bass player in the punk band Toxic Dream. But he’s more than that. It’s those other things that make Newt…well…Newt.

• He occasionally plays other instruments. He’s done guitar, theremin, and more recently he was found playing an Iggy Pop song on a violin. Punk music can be played on anything. Just ask him.
• He is not a fan of fan girls. He thinks they are all crazy because he’s just a dude and wants to be treated like a dude, not fawned, obsessed, or swooned over.
• He is accepting of almost anything. After all, his parents were, and still are, hippies who are slightly disappointed that he never developed a liking of bands like Jefferson Airplane, The Who, and The Grateful Dead. These are the sort of hippy parents that let their kids pick their own names when they were ready, and Newt named himself after his favourite lizard when he was 3. He also named his younger sister, Chaos. As a child she was a major source of chaos and as a young adult everyone swears she’s trying to live up to her name.
• He has a degree in art and when he was in college, he joined a fraternity where every member of it died in some way. This made him close personal friends with Death, and they get together and share waffle recipes every Thursday.
• He doesn’t want people to know that he’s actually smart and has a degree because that would ruin his punk rock image he has worked so hard to develop so he sometimes comes across as clueless.
• His favourite author is Neil Gaiman and he will often quote him.
• He mourned for over a week over the death of David Bowie.
• His favourite bands are The Cramps and The Sex Pistols.
• His favourite comic book character is Squirrel Girl.
• He wears guyliner. All. The. Time.
• He will try anything once, especially if he is dared. He once ate a cowplant berry just to see what it tasted like, knowing full well that if Chaos found out about it, she would be very angry with him.

When I write Newt into anything I keep all these things, and so many more things about him, in mind. It’s a perspective that helps in deciding things like how he would react in a certain situation. Yes, he’s a musician, but that’s not his personality. It keeps me from falling into the trap of blaming everything he does on being a musician.

If someone asked me a question about Newt, no matter what it was, I would have answer.

Using abuse stories as an example, when you define someone only by their abuse, you have done a few things. You have limited your character, maybe even crippled them. Their trauma becomes the reason for everything, even if it makes no sense. When watching characters like these, 99% of the time it comes across as if whatever their trauma it’s being trivialized.

Who is Your Character?

Your characters are more than one life experience. Who were they before The Thing happened?

• When is their birthday?
• What is their favourite colour?
• Favourite song? Better yet, what are 10 songs on their music playlist?
• Favourite TV show? Book? Do they even read?
• What are their hobbies?

These kind of things can be shown through sets. Take for example, Newt’s bedroom (I moved around a few things just to get them in the picture). You can learn a lot about Newt and his personality just by how he has decorated. 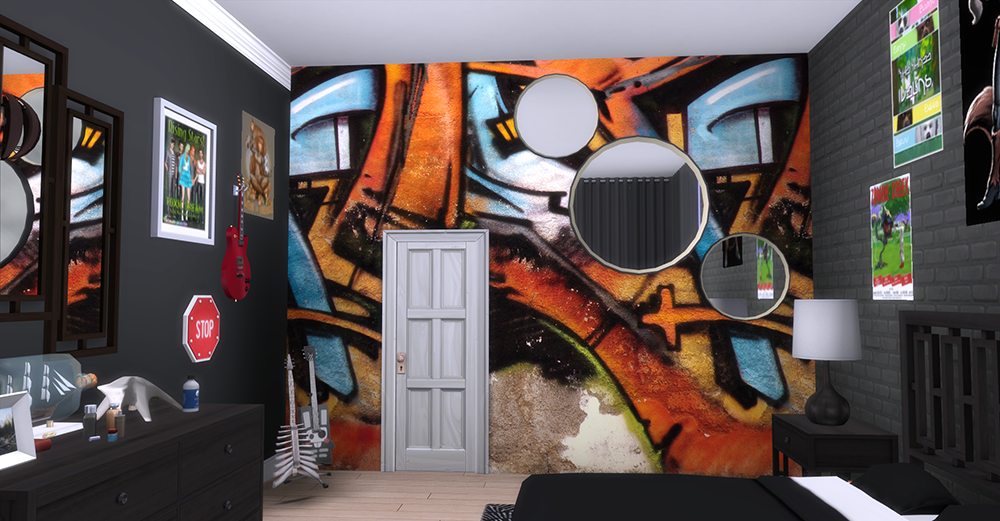 When decorating a personal space, think about the character and what they would put in it. Don’t just fill it up with meaningless clutter. I’m not saying everything has to have a reason, but most of it should. It should help you tell the audience something about your character.

There are a lot of ways to learn about your character. Do a mood board. Make a Dungeons and Dragons character sheet for your character complete with stats. Fill out a character meme. I’ve tried to get directors to do character meme sheets for the magazine to go along with interviews. I’ve had people tell me it’s stupid. But it’s not. It’s a fun form of character development.

One of the questions on the character meme sheet that I use is: How do they react to pouring themselves a bowl of their favorite cereal and discovering there’s no milk? Is your character the sort that would eat dry cereal? Find something else to eat? Go to the store? Scream at whoever they live with for using the last of the milk? Or, would they be like Newt and use whatever they can find on their cereal that seems somewhat legit such as juice, coffee, melted ice cream, or whatever questionable liquid is sitting around from Chaos’ cowplants?

If you don’t know your character you can’t tell their story. It’s that simple.

You’ve decided to write that abusive teen pregnancy story. Hopefully you have gotten to know your character and who they were prior to things.

For example (this story is based on someone I met and was friends with a number of years back) you have a 15 year old female ballerina who has been given a full scholarship to Julliard. She gets gang raped, and because of this becomes hypersexual. She ends up pregnant and gives up her dream of becoming a ballerina and drops out of high school because she doesn’t believe in abortion. She marries her boyfriend and father of the baby, who ends up being abusive.

That’s one hell of a story, on the surface it looks like it’s trivializing these kind of things because it just sounds so out there despite this really happening to someone. In order to make it seem more real and less day time talk show material, you need to show the struggle of the girl. How did dropping out of school and getting married at such a young age affect her? How did she handle the problems caused by the rape? Did she report it? Did she end up with an STD? Did she get counseling? Did she do nothing and hide it because she felt ashamed? How did her boyfriend react to the event? Were they even together at the time? What kind of mother was she at 16/17? What else did she give up? Did she have help from her family raising her child? What about the abuse from the boyfriend/husband? Did he have anger issues? Was he brought up that it was okay to treat your spouse this way? What is his deal? Did she end up leaving him? How did her family and friends react to things? Were they supportive? Was she disowned by any of them? You need to show the struggle and how it changes the character, otherwise to the viewing audience, it looks like abuse just for the sake of abuse and it has no purpose.

If you need help with character development, or any part of machinima making, feel free to ask more experienced machimators or those that inspire you. Most people who make machinima are always willing to help someone out who is struggling. SimsFilmFest staff members are always willing to help, or we can help you find someone to work with you. Together we can end bad machinima sterotypes. 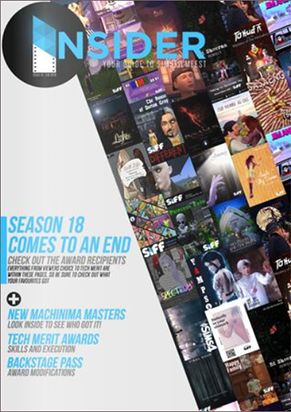