You’ve written your machinima and now it’s time to create and/or cast sims in the parts. It’s easy to create the prettiest sims and dress them in the newest, most popular, and fashionable custom content out there, but you don’t want to do that. When a sim is supposed to be a stay at home mother of three toddlers and she’s dressed like a fashion model in heals, it’s hard to take her seriously in that role…and yes, we’ve seen people do this sort of thing. Moms don’t dress that way when they are staying at home chasing around small children.

You can have the most awesome story in the world, but if the characters aren’t molded to fit into the world that you created for them, your end product is going to be lacking.

So, let’s talk about character creation.

There are some players that are very recognizable because of the sims in their pictures. Everyone has that one or two sims that they give extra love to, that they have developed stories for and have gone the distance to project their personality. While a sim for a machinima may only be used for that machinima, they deserve the same kind of love because they are going to, with the help of their voice actor, bring your story to life.

Get to Know Your Characters

There are a number of character creation sheets floating around the internet. A Google search uncovers them quickly or you could visit WriteWorld for a list of questionnaires. They ask questions like:

Other character development questionnaires ask how your character would act in certain situations such as:

You get the idea. Each of these questions uncovers something important about your character’s personality. It may not be something that you need to put in your story but it helps you decide how you want the character to come across and keeps them from being flat. You will be able to use all these little details that you come up with in your set designs to help tell the character’s story and help to get to know him or her better. They help you get inside their heads and see how they tick.  These kinds of details also help your voice actors in portraying your characters. This is why a lot of voice actors will ask for a picture of the character they are playing. It’s just not because they are curious about what they look like. How they dress, how they wear their hair, etc tell you something about their character.

Let’s take a look at SimsFilmFest’s Battle of the Bands very own Newt Davies.

Newt has quite the story that has been developed over a number of years. 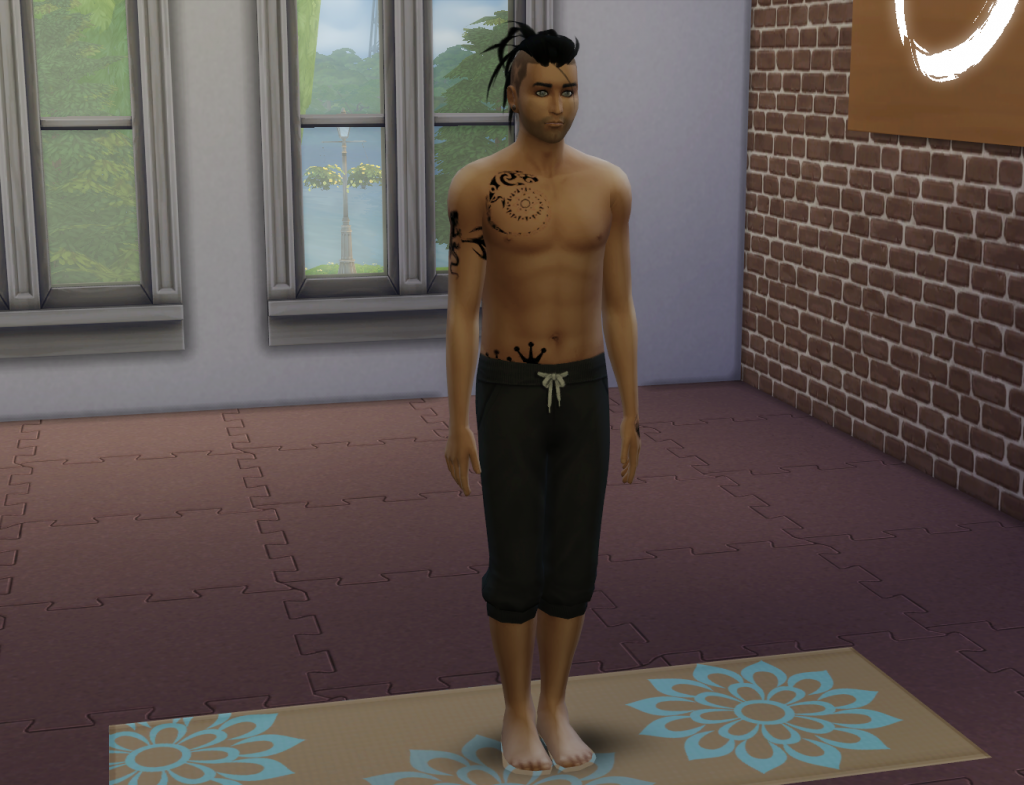 I really just wanted a picture of Newt to accompany this but, for those unfamiliar with Newt, this picture tells us a number of things. His hair, guy-liner, and tattoos tell us he’s at least unconventional. The lizard tattoos tell us that he either likes lizards, takes his name seriously, has decided that with a name like Newt that lizard tattoos are ironic. Check out those abs. He obviously keeps himself in shape and obviously, yoga is his exercise of choice.

It does bring up the question, how does a punk rocker get involved with yoga?

Taking a trip into his bedroom we can learn more about him. 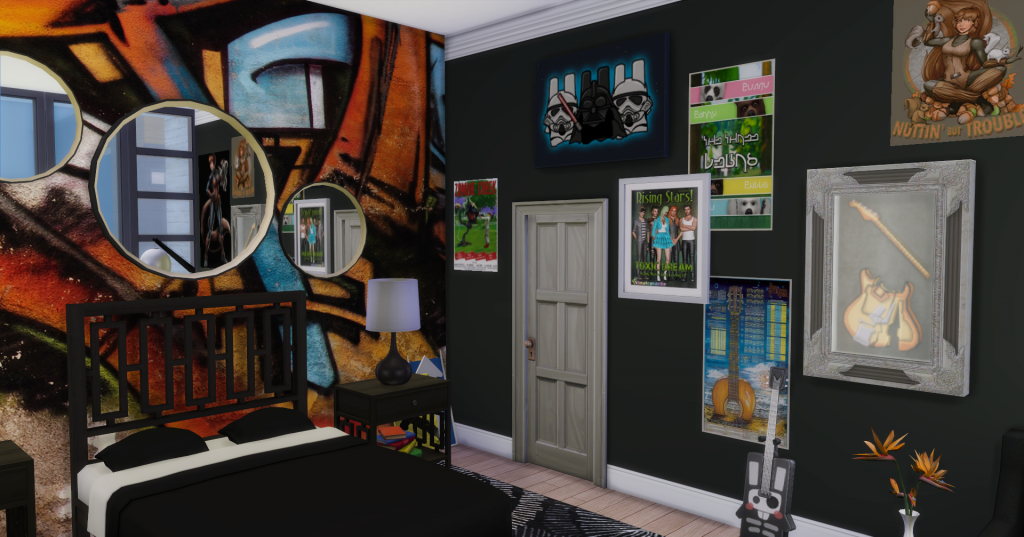 For the most part his room is black (easy to conclude that it may be his favourite colour) and one of the walls has been painted in graffiti. Did he do that or did he pay someone to do it? There is a framed Rising Stars magazine with his band on the cover. A Freezer Bunny guitar sits next to a guitar chord poster. Obviously he plays guitar (or bass). The broken guitar behind glass could be his or belong to his favourite guitarist. You can see things that he likes in the room, books on the bottom shelf of the nightstand, Squirrel Girl comics, Star Wars, The Three Bears, and B-Movies. Closer inspection you realize that he had a bit part in that B-Movie.

People do pay attention to these kind of details. Think of the number of times that you have watched a TV show or movie and noticed some small detail in the set that tells you that your favourite character shares one of your interests.

I also want to take a look at Mercedes, who you may know from Film Talk, in this article. 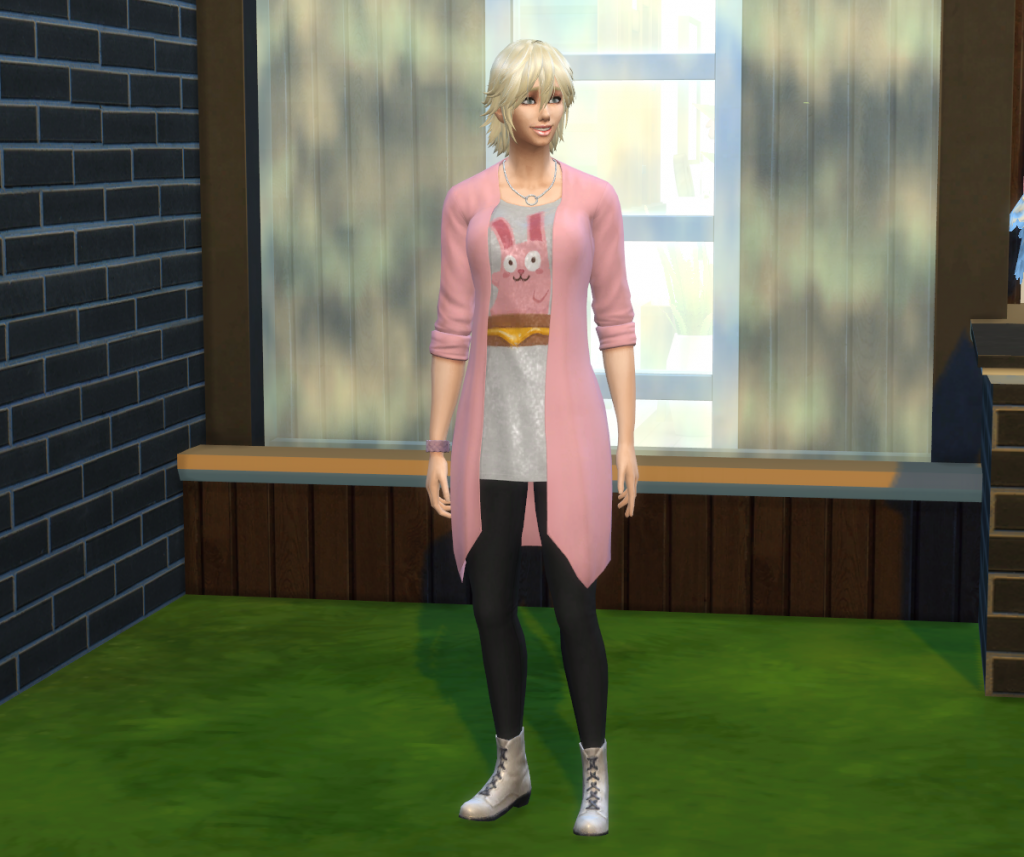 She may lead the life as a public figure, but her hair isn’t perfectly manicured, and she’s not too concerned with fashion. She’s usually wearing something in her favourite colour (pink) with her favourite thing in the world on it (the Freezer Bunny).

Her house reflects this as well. 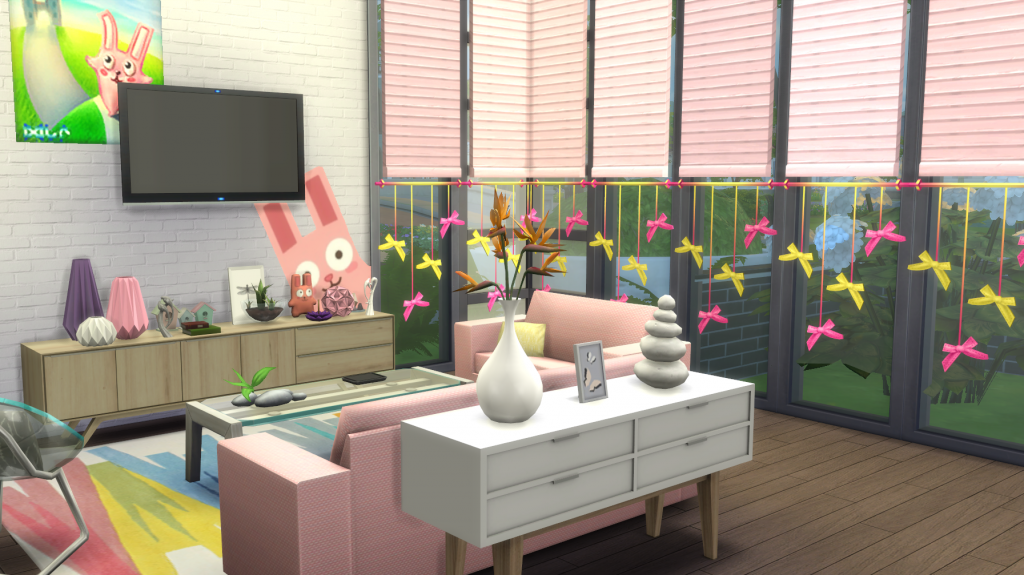 More pink and more Freezer Bunnies. Pink has always implied a girly-girl image, the bow window dressings add to that. She has more classy decor mixed in with the fun things.

These kinds of details should always be considered and used to reflect the characters aesthetic. It’s not enough to say that someone is a punk rocker. You have to show us that they are a punk rocker. Give them ripped jeans, spiked bracelets, a Sex Pistols t-shirt, and nontraditional hair. Don’t say that someone loves Freezer Bunnies and then never put Freezer Bunny decor in their house.

Consider this. With a book you can go into all the details you want on how someone looks, how they dress, how their house is decorated, how they think and act. With TV, movies and machinima we have to be shown. This is where dressing that stay at home mother of three toddlers realistically comes into play. Think about the people you see in public. How is that mother with the little kids in tow at the grocery store dressed? Does she look comfortable in her role as a mother or is she frazzled from not enough sleep and cleaning smeared peanut butter off the walls?

One of my favourite characters when I made Zombie Creek was Jennifer. Why? Because, despite living through a zombie apocalypse, she kept her sense of humor and wore t-shirts that made zombie jokes.  That alone tells you something about her.

Title Sequences and Why You Should Use Them