We are really excited for this season of SimsFilmFest. Changing the festival to once a year has given us the time we needed to get all the things in order that we needed to. Except that Voice Actor Directory. We really need to get on that. It will be updated and redone very soon. We finally have things working how we want them to and this season should run more smoothly than ever! It no longer seems like work to keep the festival going. It’s fun again. So, let’s talk…

Entries are now open! We want your projects! Anything completed after June 15, 2018 is eligible for the festival. We don’t want anyone to feel like they have to make something specific for the festival anymore. There is plenty of awesome machinima that is made throughout the year and we want to see it here.

If you really want to make something specifically for the festival, we aren’t going to stop you. However, everyone is allowed to enter up to 5 entries so why not submit an older project as well. It might find a new audience. If you’ve never entered SimsFilmFest before, why not do it this year? What is stopping you?

Seriously, what is stopping you? We welcome everyone no matter what your machinima experience. You don’t even have to have voice actors. Believe it or not, there are a lot of people out there that like subtitled projects without voice actors. Your project doesn’t even have to be in English. We have a “Best Foreign Entry” that we don’t get to give out often enough. We also don’t discriminate against any version of the Sims. We’re still waiting for that Sims 1 entry. 😉 We’ve never stated this, but technically, The Sims Medieval counts as a Sims game. Think about that a moment. 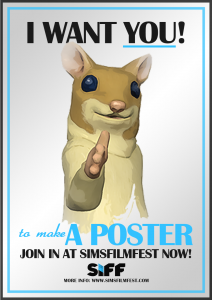 When we opened up our Anniversary Survey and our Features Survey, 83% of everyone who has responded said they wanted community created festival posters brought back. This means that anyone from the community can submit a poster. We are looking forward to seeing what the community comes up with. We’ve really missed seeing these posters.

Once you create your poster(s), feel free to share them on your social media pages, or wherever you put things. Just don’t forget to upload them to the poster gallery. Please drop us an email letting us know that you have submitted a poster where we know who to credit later. The winning poster will be used throughout the season to promote SimsFilmFest.

We need these posters by February 20. We want to give everyone a chance to vote for their favourite posters where we can announce the winner on March 1, the official start of the season!

We are still looking for people to contribute to the site. We are looking for any content related to Sims machinima. We are looking for everything from tutorials to people wanting to blog about machinima. We don’t ask anyone to do anything that they aren’t comfortable with. If you want to write one tutorial for the site, we’re good with that. If you want to maintain an ongoing column or blog, we’re good with that as well. Drop us an email, or find us on Discord.

We’ve gotten a couple questions about this, so it needs to be addressed, again. Project Bluelight was the brainchild of TwistTVShow, and it was up to her to run it. It was up to Twist to run it, and the second season we held it, she wasn’t as available as she thought she was going to be and those that entered didn’t finish their projects. Not only that, it was hard to find Masters who wanted to participate. Many of them stated that they felt that people shouldn’t have to win a contest to get their help, that all they should have to do is ask.

Twist is no longer part of SimsFilmFest, and she announced on her YouTube channel that she is no longer going to be making machinima. This means that Project Bluelight will not be making a comeback. We have been tossing around ideas to replace it as something to do between seasons and while we have a few ideas, nothing has been finalized yet.

This was mentioned before, but we are doing a new thing with the magazine this season. Actually, it’s something we would also like to continue between seasons if we can. We want to use the magazine solely for showcasing machinima projects. This means we need pictures from your projects! We want to add things like director interviews, character interviews, and voice actor interviews to the features. SimsFilmFest Machinima Magazine is going to take the original Rising Stars idea from back in the day and expand on it.  If you want your project featured in one of the magazines, let us know.

So, who is ready to get Season 18 started?

How to Machinima: The Landgraabs