I know that subtitled series aren’t for everyone. I can come up with at least half a dozen reasons why I don’t like watching them because I have sat through a number of them that could have been a lot better. Having said that, The Saga of Sunset Valley is a bit different than normal subtitled machinimas. The Saga of Sunset Valley is divided into two parts, The Prequel, which has come to an end after 21 episodes, and The Sequel, which has just started.

THE SAGA OF SUNSET VALLEY: WHAT IT IS

There are two types of Sims players. Okay, there are more than that, but for the purpose of this write up, there are two. Those that jump in and live out the stories of the pre-made families that came with the game, and those that make their own sims, houses, and play out those stories. The first group probably can’t tell you much about any of the pre-made families. They would be able to tell you who Geoffrey Landgraab is if they saw him in their game, but they probably don’t know anything about him. ZeeGee will make you want to know about those families.

She’s the second kind of player, or at least appears to be based on this machinima. She has created an imaginative and believable backstory for Cornelia and Agnes Cumplebutton weaving it in with many of the other characters that EA gave us with The Sims 3.

In The Prequel part of the story we learn how the sisters came to be in Sunset Valley, how they met The Goths and how all the people they met along the way changed their lives, from Victor and Greta Goth to Jared Frio, Erik Darling, and Lolita. 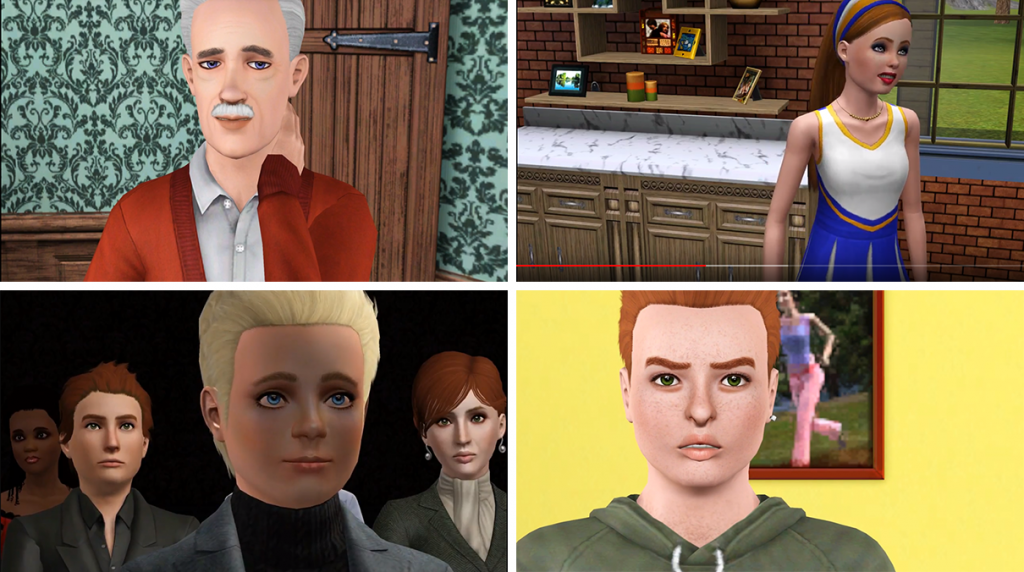 A number of questions are answered about many of the characters of Sunset Valley. What happened that made Agnes a grump prude that beat anyone showing affection with her purse? Did Jared Frio ever come around and quit being the mean-spirited delinquent we meet at the start of The Sims 3? How did Cornelia and Gunther meet? Why did Gunther’s sister, Frida, run off to Moonlight Hollow to live with their Uncle Samuel? Who is Lolita Goth and what became of her? I don’t want to give anything away. There are many twists and turns in the story creating an emotional roller coaster. By the end of this, if you didn’t care about the characters before, you will.

The story doesn’t stray far from the characters that EA created and ZeeGee stays true to what information we have been given about each of the cast members throughout the Sims Franchise.

The Sequel part of the story picks up right after the start of The Sims 3 and promises to introduce more of the townies of Sunset Valley.

THE SAGA OF SUNSET VALLEY: WHY YOU SHOULD WATCH IT

Because I said so! Not a good enough reason? Okay…

Unrelated to the story itself, it’s quite interesting to watch how someone improves in their machinima making skills. This is ZeeGee’s first project, and for a first project, it’s quite the undertaking. Yes, you can see some editing errors, but none of them distract from machinima. The first episodes are rather raw (they still look better than my first attempt), and you can see a gradual improvement over the episodes as she develops her style.

The story is amazing. For a subtitled series, it doesn’t rely on subtitles to tell the story. Some of the episodes don’t even have subtitles! It takes a special kind of machinimator to be able to tell a story without dialog of any kind. The episodes that do contain subtitles don’t have a ton of them that require you to pay more attention to reading than what is going on, and they don’t go by so fast that you miss something.

Most episodes are under 10 minutes. The longest is just over 11. The episodes don’t drag on with a lot of unnecessary filler. They each tell their part of the story and they will make you feel. So much is conveyed in those short minutes.

If you want to know about the intricate web that connects the majority of premade families in The Sims 3, The Saga of Sunset Valley will help you with that.

So, grab a snack and start watching. Once you start you won’t be able to stop until you have watched all the episodes. When you’re done, be sure to subscribe to ZeeGee’s channel where you know when the next episode is up!

One thought on “Binge Watch: The Saga of Sunset Valley”