We are making plenty of small changes this season to SimsFilmFest, if everyone hasn’t noticed. Hopefully, all these small changes add up to something big and make for a better festival experience. We’re pretty excited about everything we’re doing and it’s gotten us more excited than ever for Season 18!

Two more changes we are making are two the awards and the festival tickets. The award changes are a little more significant of the two and we hope that everyone likes the change. As for the tickets, the new ticket design will mean fewer errors being made, as there will be less to edit.

Looking through the survey responses we have gotten so far two words keep coming up that are concerning: “unfair” and “clique”. Granted, we have heard this from the start of the festival for the simple reason that people are always going to vote for their friends in the Viewers Choice awards. We’ve tried to compensate for that as best as we can, but it’s always going to happen. We can’t tell people who they can and can’t vote for. We have come up with an idea that we hope offsets this issue a bit more.

Starting with this season we are going to go 3 award categories.

VIEWERS CHOICE AWARDS: The Viewers Choice Awards are not going to change. We are still going to let The Sims Community vote on their favourite machinimas. It’s part of what draws people to the festival. We have done this from the start of the festival and we really don’t want to change this. If we’re honest about it all, getting rid of the Viewers Choice Awards would probably cause a revolt and the death of SimsFilmFest.

TECHNICAL MERIT AWARDS: The Tech Merit awards aren’t changing either. We’ve not come up with any new categories that we can add and we are all about acknowledging the hard work that everyone puts into their projects and the best way to do that is through the Tech Merit Awards.

STAFF PICKS: The Staff Picks is the new award category. Staff Picks aren’t a new thing. In the past, and under the threat of cruel and unusual punishment, staff members have written up articles for the magazine choosing their favourite entries. How many of the staff members do this each season has always varied and depends on the amount of time that people have to commit to doing these extra things. Going forward, staff will be voting in their own polls where their votes are recorded outside of the Viewers Choice Awards. This means unbiased voting in all the regular Viewers Choice Award categories without falling into the trap of having judges. We’ve never wanted judges because that means some kind of rating system and opinions on what was done right and wrong. Often times that is subjective.

Every season we try to do commemorative tickets for everyone. It’s a fun thing that everyone – directors and staff alike – can use to promote machinima projects. The tickets that we have been using over the last few seasons have been kind of a pain to edit and often mistakes are made when editing them.

We have come up with a more modern and easy to edit ticket for this season. We hope you like the new design.

The QR code even works and goes to a page that announces the day that your machinima projects debut: 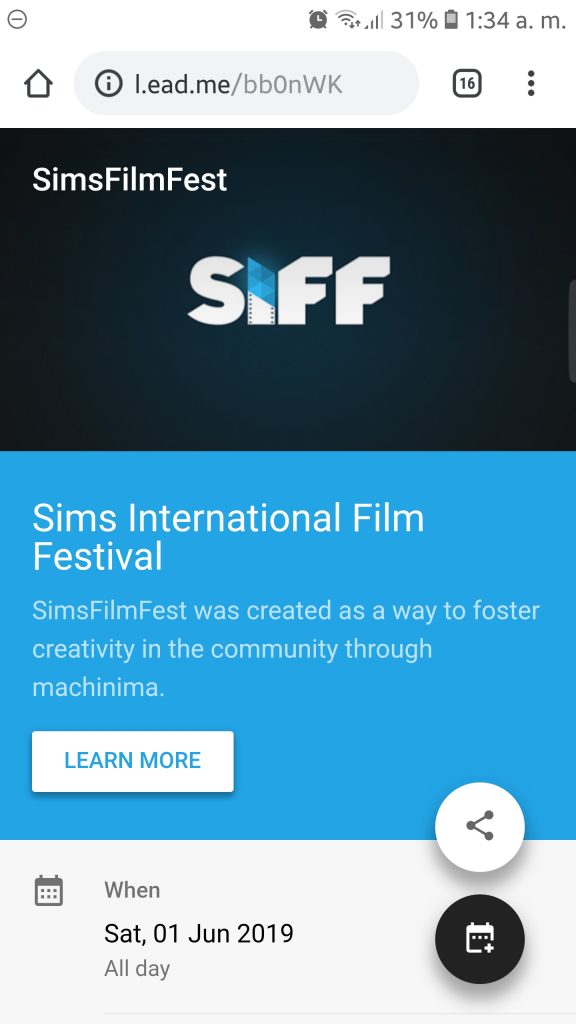 We’re not really sure how popular QR codes are, but this is a pretty cool idea and we can all thank Gus Rockman for coming up with the idea. As always, we welcome your feedback and would like to know what you think of these new ideas, especially the new award category. You can leave your comments below (you don’t have to be logged into the site to comment) or you can drop us an email.

How to Machinima: Sets

One thought on “Award and Ticket Changes”