Terah: The Crystal of Life
by: Aaron Isak Berry
A Sims 4 Series

Long ago when the world was without faith or a name, there were two dominating species on the planet. The Teranians, their skin coarse as wood and ears pointy like arrowheads. And the Avarians, their skin pallid like porcelain, and hair either snow or obsidian in color. But the Avarians did not believe that two species could dominate at once, so they fought. The war went on for 10 years, and on the 10th year, the Teranians face the threat of extinction…

Where to start with this? I am just blown away that this is Aaron’s first machinima project. It seriously looks like he’s been doing this for awhile. The storytelling is amazing and it is so well put together. Aaron has found a way to use elements of a variety of expansion packs such as the rainforest from Jungle Adventure, snow from Seasons, and Sylvan Glade and none of it looks out of place. It all blends together beautifully to create Terah. Those who are not familiar with The Sims franchise may find it hard to believe that this was made with The Sims 4. 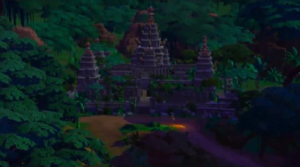 I can’t imagine the time spent building the sets for Terah: The Crystal of Life. There is so much attention to detail both indoors and outdoors. The sets weave the world and the story together drawing you in. Immersion is a word that should be used more when talking about machinima. Good storytelling creates immersion for the audience and sometimes the smallest thing breaks that immersion. Aaron worries that the subtitles that he added himself break this immersion, but they are easy enough to block out because the machinima grabs you and holds your attention. Even the special effects are executed flawlessly.

I don’t know where the voice actors were found for this project, I didn’t recognize any of the names. They are extremely talented and brought each of the characters to life.

Now, let’s talk about the story itself. As of the writing of this, there are two episodes and a prologue up. The prologue should be counted as an episode itself. It does much to set the stage for the story which is told in both the past and present following the struggle of the two races of the world to live together. The Teranians and Avarians are as different as night and day. 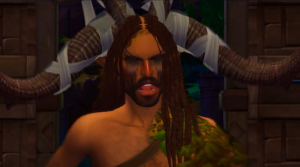 The Teranians are the more primal looking of the two species with long pointed ears and huge horns that look as if they would weigh their head down.They are what I would call “children of the land”. They are a warrior race that is more in touch the world that they live in than their counterparts. The Teranians are also the more interesting of the two races. It is their involvement in the world that gives us a remarkable story. They called upon their god, Sol, to help right all the wrongs in the world. It gave them a time of peace that threatens to be shattered. 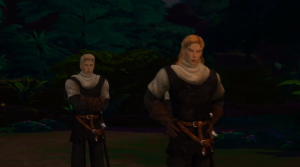 The Avarians are more human-like with all the faults that we have. They live in what would be Terah’s modern cities. They don’t feel that both races can co-exist peacefully, as they are so different. War was declared on the Teranians . After 10 years of war they had nearly wiped out the Teranians when Sol was called upon to bring clarity to all, to make both races see the harm and destruction their actions were causing. This is where the story starts.

The war ended and the Avari forgiven. They had the best sculptor in the land, Exavius, build a palace in her honour. When he laid eyes on Sol, the two fell in love and were soon married. Because he was mortal, and she divine, they couldn’t have children. Exavius was distraught they couldn’t have a daughter and Sol told him there was a way, but the price would be great. Her husband said he would pay whatever that price would be. 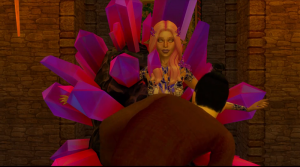 Sol formed a rock out of their combined love that Exavius would use to sculpt their daughter. His skills as a sculptor gave her form and Sol gave her life. They named their daughter Selania. Terah: The Crystal of Life becomes her story.

Selania is half Avari and half Teranian but much like her mother, she has a crystal of the divine on her forehead that holds her essence, or soul, and gives her life. You can’t have a story without an antagonist, and the antagonist in this story wants her crystal for reasons unknown. 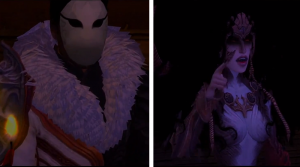 Next to nothing is known about the antagonist. At this point we don’t even know his name. His face is obscured with mask and his clothes belong to neither race. He calls upon Beleth, the spirit of manipulation, to help him reach his means.

Her host is another mixed breed female who provides certain favors to men for coin, Ivy. Ivy is already the subject of much scorn because she belongs to both and neither race and works as a bar whore. Beleth takes a liking to her much to the antagonists displeasure.

Beleth both protects Ivy and convinces her that she needs to stand up for herself. Ivy becomes another central character in the story. 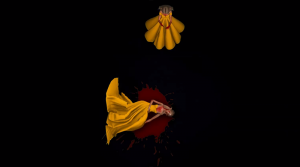 No mere mortal possesses the power to kill a deity, and yet, Sol has been murdered. It is implied through flashbacks that Ivy, and therefore Beleth and the antagonist, may have played some part in this. With the death of Sol, the Avarians have started to loose clarity. She is sent to live with the Tevarians for her own safety leaving behind her friends and the only life she has ever known.

Abas, the younger of the two sons of the Teranian Chief, Darkari, gets tasked with protecting Selania. This sparks both anger and jealousy with the older of the two siblings, Amauri. Either by coincidence, a twist of fate, or divine intervention, Ivy arrives at the Teranian village not long after Selania. Her arrival corresponds with what could be considered a normal sibling rivalry escalates to something unhealthy and Beleth, through Ivy, keys in on this and attempts to use Amauri to help gain Selania’s crystal. 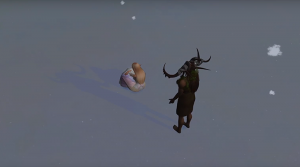 Darkari is unaware of the trouble brewing between his sons, as Amauri is after the Selania’s crystal and Abas isn’t backing down from his duties as protector. Selania is lost in her own mind, unable to deal with the trauma caused by her mothers death, and Darkari has entered her mindscape to try and help her.

Things are left on quite the cliffhanger. Based on the time between episodes, it could be between 2 and 4 months before all our questions are answered and we find out what happens. Given the custom animations, there is a fight scene that looks as if it uses TS3 animations, elaborate sets, attention to detail, and filming in areas of the game not easily accessed, 2 or more months between episodes doesn’t surprise me. The wait time will be well worth it. With each episode you can see improvements to the filming and editing process that only come with practice. Terah: The Crystal of Life proves that with a little time and a lot of patience, even someone who has never made machinima can achieve a most excellent finished project.

One thought on “Machinima Spotlight: Terah The Crystal of Life”